Yeshivish in general, including the new Sephardic generation in Israel that became influenced by the Yeshivish, wear more modern clothing and match it (up to a point) the elegant spirit of European fashion. They wear dark pants, a white buttoned shirt, short suit, tie and a black hat.

The Yeshivish ancient Orthodox Jewish Clothing style began during the Enlightenment in the nineteenth century. The secular educated Jews, underestimated the yeshiva students and called them downgrading nick names.

Rabbi Nosson Tzvi Finkel, known in the Haredi ultra-Orthodox world as the 'grandfather of Slbeodka', sought to encourage the spirit of the yeshiva students and raise their self-confidence and prestige. He adopted his students to wear clothes that were considered at the time in fashion: a short suit, hat and modern, round glasses and a cane. This is exactly how the students were also educated at that time. Fancy dress fit his moral system, which emphasizes "human greatness." Till this day, the Yeshivish ultra-Orthodox people to go short clothes. Nowadays they're not in fashion, but the ultra-Orthodox public has its own fashion, and yeshiva students adore to this fashion.

By the Yeshivish there is no significant difference between weekday attire and Sabbath (Saturday) wear, except for the tie. Yeshivish usually wear a tie only on Sabbath and holidays. Of course, there is separate clothing for Sabbath and weekdays. Sabbath they will wear a more elegant suit and hat. By the Yeshivish public, only rabbis and heads of yeshivas, wear long suits. By a small sector among the Yeshivish, students of Rabbi Avraham Yeshayahu Karelitz zt"l, known as the Chazon Ish, the public also wears long suits as part of their traditional Orthodox Jewish clothing.

Not only Yeshivish dress this way. Hasidim of the Chabad- Lubavitch movement, dress just like the Yeshivish excluding on Sabbath. Lubavitchers wear Sabbath an upper garment that looks like a three quarters of a conductor's jacket, bearing the name Sitruk. Chabad followers never remove their hat of their head. You can see many times Chabadniks, especially on hot days, when they walk around without a suit, but wearing a cap.

Excluding Chabad Hasidim that don't dress different than the Lithuanians, the Hasidim will be recognized by their Hasidic clothing; a suit that comes to length of three quarters of their body. Old Jerusalemites followers wear a coat and a black robe called "Halat".

Ultra Orthodox Jewish clothing include Tzitzit, a wool vest-like piece of clothing with fringes at its four corners. 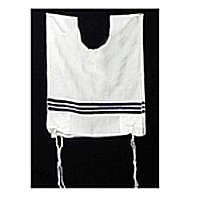 The Hasidic clothing style includes wearing the Tzitzit on the shirt. Some Hasidim will wear a vest on the Tzitzit, but this is not mandatory.

In the past, long pants were considered modernity, so many Hasidim pants are not long, but come up to half a foot, bound at the knee. Once all Hasidim dressed this way and it was part of Hasidic clothing. Today, the Hasidic sects of Belz, Toldos Aaron, Toldos Avrom Yitzchok dress this way. Gur Hassidim pants come up to only three quarters of a foot. A clear indication of Gur Hasidic clothingb that they stuff their pants into socks - Yiddish it's called "Huizen Zaaken", ie, pants socks.

The hat is also a major part of traditional clothing. Hasidic clothing boasts with its special variety of hats. The traditional Jewish Hasidic hat by the Belz, Bobov, Skver and Viznitz sect is a tall hat with tiny fur, while Satmar and Jerusalemites wear the same hat, but not as tall. Gur and many other Hasidim of Polish origin wear hats that are tall with a slight dent on top. See the pictures for better understanding.

Hasidic clothing on Sabbath and holidays

The overcoat worn the Hasidim on Sabbath, is a shiny silk cloth, called a "Kaften" of "Bekitshe". Hasidim of Toldos Aaron and Toldos Avrom Yitzchok wear a golden jacket with black stripes topped with a belt about 18 cm wide, with black stripes.

On his head the Hasid will wear on Sabbath a "Shtreimel" or "Spodik".

The "Shtreimel" consists of a cap surrounded with fur of tails from a fox. The "Spodik" is worn by Hasidim of polish origin. It is very similar to the "Shtreimel", only a little taller and made of synthetic fur.

Wanna know more about Orthodox Jews Culture? Browse the many pages in this site!

Have something interesting to say on Orthodox Jewish Clothing?

Back to Orthodox Jewish Clothing - home