A brief overview on everything about Orthodox Jews

"So, what is an Orthodox Jew?"

In this site you will find all information you need on Orthodox Jews.


What is so unique about Orthodox Jews? Let me start by listing just a few of their rituals. They go to Synagogue Three times a day (!), most of them will always wear some type of skullcap (Yarmulkeh or Kipah in hebrew) on their head,

and one week of the year they will take a branch of a palm tree with three other species and wave it around to all sides.

Orthodox Jews are very unique in their lifestyle. They are very family oriented and lead warm and loving large families. Honoring parents and devotion for their children's humble and honest upbringing is a core orthodox judaism belief. 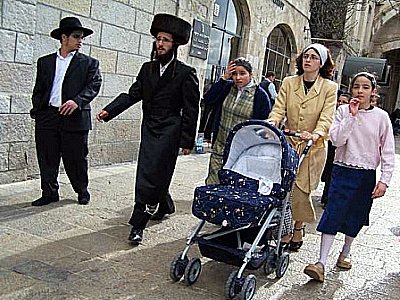 
Where are they located?

The largest population of orthodox Jews are in Israel, then followed by USA, and finally in some Eastern European countries. Their population reaches close to One Million and growing. According to a research done by Professor Joshua Comenetz from The University of Florida the Ultra-orthodox Jewish population doubles every 20 years.

Approximately 10 percent of the Jewish population in the US is orthodox. According to research by a University of Manchester academic, orthodox British and American Jews are set to outnumber their more secular counterparts by the second half of this century.


Where do they live? Many orthodox Jews live in together in large communities. For example in the city of Jerusalem, Israel or Brooklyn, NY, there are tens of Thousands of orthodox Jewish families living in a closed tight knit community.

Do you want to know where an orthodox Jew lives?

I will tell you a secret. Look at the door post, if you see a small Mezuzah a piece of plastic or wood with a parchment rolled inside, connected on the right side, then you know. There is an orthodox Jew living in that house.


Can you describe their core beliefs? There is one thing that unites orthodox Judaism through all its sects: The Judaism belief that the Bible (The Old Testamant or Torah Shebiksav, the written Torah) and the Talmud (Torah SheBaal Peh, or the oral Torah) are all divinely given from God (Hashem), and therefore cannot be modified or changed.

All Orthodox Jews believe in one God (Hashem) and that the Jews are his chosen people. They Believe that there is only one way to interpret Judaism, which is the orthodox way. All other streams like reform and conservative Judaism are later developed approaches that have no right and place in Judaism religion. 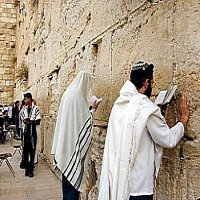 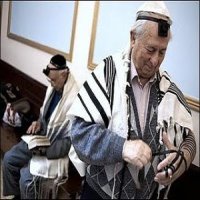 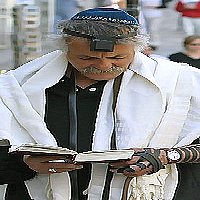 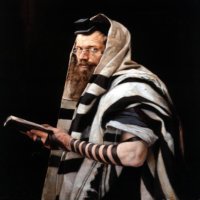 Orthodox Jews praying with tallit and tefillin
Can you list some basic rituals of orthodox Jews? There are three main commandments or Mitzvohs, that every orthodox Jew will keep. They are:
How do they adopt to the secular environment? This is a very good question. There are multiple sects in orthodox Judaism. From those ultra-orthodox Jews who live in the US but hardly speak English, only Yiddish being their native language, to more modern-orthodox Jews that mingle among the secular croud.

While some of the ultra-orthodox are educated and encouraged to stay away from the outside world, by not allowing TV's or Computers at home, the modern-orthodox encourage their youngsters to go to college, grow up doctors, lawyers or any other profession, and be a role model for the world.


Are there any special life span ceremonies? Sure!

It all starts by a baby boy when he is eight days old! That is the exact day when the baby will be brought in Shul, or Synagogue and be circumcised - have a Brit Millah. A baby girl will have a Kiddush, a special celebration, the Sabbath following her birth.

By some orthodox Jews, at age three, a boy will have a special Jewish haircutting ceremony. It is also known as "chalaka". A yarmulke and tzitzis will be worn from now on, and the child will be taught to read the Hebrew alphabet.

At age twelve a girl will become bat-mitzvah. This is when she reaches adulthood age according to Judaism. This is the age where she becomes obligated to all laws in Judaism religion. 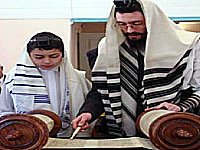 The same is by a boy when he turns thirteen. This is the age when he will turn Bar Mitzvah. The Bar Mitzvah will be celebrated in Shul, or Synagougue, where the Bar Mitzvah boy will read from the Torah scroll his first time and will start putting on tefillin.

The wedding in orthodox Judaism is led by a special ceremony called a Chuppah. Where the groom will give a ring for the bride under a nice canopy, the Kettubah will be read and a glass will be broken.


What are the annual Holidays? There are many holidays in Judaism religion. Orthodox Jews observe those holidays in unique ways. The Talmud on the book of esther quotes Haman telling the king of Persia, Achashveirosh that the Jews never work because they are busy with their holidays.

The holidays in the Jewish Calendar are as follows:

Each of these Holidays are observed in a special way. Rosh hasshanah by blowing the horn of a ram, Passover by not eating any leaven bread but only eating Matzah and Sukkot by sitting in a hut covered with branches and grass, for seven days. All orthodox Jewish holidays are special happy family time to celebrate.
What is Judaica? Judaica is religious items related to Judaism. Like a tallit, Tefillin, Shoifar and more. In any orthodox Jewish neighborhood you will find many Judaica stores. Judaica stores are a basic need for any orthodox Jew. Many people like to collect Jewish artifacts, and Judaica can also be a nice gift for your orthodox Jewish friend or business partner.

Is this all I need to know?

There is lots and lots of more to learn. Orthodox Jews study the laws of orthodox Judaism their whole life. So, do you expect to know it all just by reading this home page? Read our many pages explaining many details and enjoy! Still have questions about orthodox Jews? You are welcome to contact us and we will try to help you.

You will find lots of info and helpful articles. Just look around, learn and have fun!

Back to Orthodox Jews- Home page